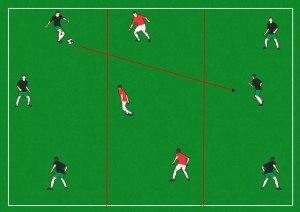 Pressure can be added by allowing one of the defenders in the central zone to enter into the zone where the ball is to try to steal it and make it more difficult (and game-like) for players to pass the ball through to the opposite zone.

Depending on the session’s objectives, the coach can choose to concentrate on the attacking or defensive groups.  Defensively, the coach can demonstrate to the players how pressure is applied by one defender and the necessary positioning of his teammates to apply effective cover and balance to intercept a pass.  The coach can provide instruction on body shape of the defenders, and highlight the need for communication (e.g., should the first defender – the one applying pressure – shape his body to force the ball carrier left or right?  What are his teammates telling him?).

An example of good defensive positioning: 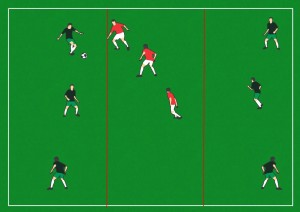 Note the body shape of the first defender forces the ball carrier to play inside, where he know his teammates are.  The second defender provides cover, preventing a straight pass through the lines.  The third defender provides balance and makes the field very small, making an attempt to the other side very difficult, thereby forcing the attacker to keep the ball in the zone.

Offensively, attacking players learn to use rapid ball movement to unbalance a defense.  Players within one zone can pass the ball to each other within the zone and can also move freely to interchange positions (rather than remain stationary) and determine for themselves how and when to best pass the ball to their teammates in the opposite zone.