How many times have you seen parents watch a coach lead a drill at practice and try to figure it out? In this section I will illustrate typical exercises used at soccer practices and explain why a coach might use the drill and what he hopes the players will learn from it.

It is important to note that many of the same games used at a practice can be modified based on the coach’s objectives for that practice. A simple example is a 4v2 possession game; it can be used to emphasize passing and receiving skills, penetration dribbling, the role of the cover defender, etc.

I would suggest to youth soccer coaches – do not be afraid to communicate what you are doing with the parents. Essentially, you are a teacher to the kids. Engaged parents have a strong desire to know what teachers are doing in the classroom, and this desire extends to athletics. Make parents a partner in what you are seeking to accomplish, and this holistic approach can only help you in the long run as you seek to improve your players.

In its simplest form, the game of soccer can be reduced to the two elements of time and space. The team that has the ball wants more of both; the team without the ball wants to limit both. How teams manage these elements affect the outcome of the game. During practice, coaches manipulate these elements through the size of the playing area, number of players, and restrictions (e.g., limiting players to two touches, etc.).

At the younger ages, all drills (or “games”) should have a focus on ball mastery and technical ability. As players progress, tactical components are added, leading to the development of skill. While a player can receive the ball through a variety of techniques, skill refers to the effective application of technique in the specific game situation.

On this page I will include some basic soccer drills. Again, note that the drill itself is not important; it is how the coach uses it to teach some element of the game to the kids. 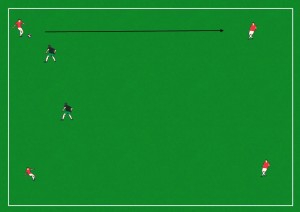 Let’s take a look at this exercise, which has become a staple of soccer practices for its effectiveness in educating players on a myriad of topics.  At its core, 4v2 for the team in possession provides opportunities for players to learn critical tools related to keeping the ball under pressure.  Coaches facilitate this process by placing restrictions on players in order to focus on particular aspects.  The game, played with certain limitations on players, allow coaches to make specific points related to the focus of the drill.

Attacking elements such as various receiving and passing techniques, dribbling, moving off the ball, and many others can be worked on here.  Defensively, coaches can focus on the roles of the first and second defender.  Coaching points can be as varied as body position, communication, first touch, etc.

The game can be played with the attacking players in or out of the square, in the corners or on the lines, or randomly located within the square.  A player’s touches may be limited (one or two-touch, for example).  The potential modifications are endless.  The drill can be progressed by adding players, making the game directional, adding goals, etc.

Its variability makes it a suitable instructional tool for nearly all aspects of the game.  A skilled coach will use it to focus on particular technical and/or tactical elements he feels is important for his team to learn.

The next time you see this drill in practice try to work out what the coach is trying to instill in his players.

One thought on “Soccer Drills”