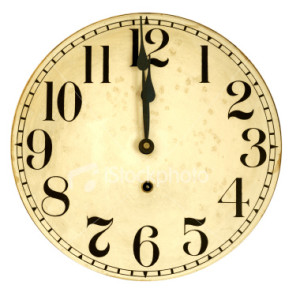 In my last post we talked about space, which leads to its counterpart, time.  Time – it’s something everyone wants more of.  Time to make decisions, time to do things, etc.  It’s the same with soccer.  Players on the ball want more time to decide how best to help their team.

When your team is on the ball, time is the key ingredient.  Time provides a team with the answers needed to solve the problems presented by the opposition on the field.  Along with space, time helps frame a player’s decision-making process.  Attacking players are looking for more time to make plays, while the team without the ball is trying to limit the space they can play through in order to shorten the time they have (in the hopes that a mistake will be made).

“In a small space a player has to be able to act quickly.  A good player who needs too much time can suddenly become a bad player.” – Johan Cruyff

All players need time; players with better skills need less time to settle the ball and make decisions than others.  Coaches need to bear this in mind in two ways:  first, they need to work on helping players improve their skill level, and secondly, they need to construct strategies that put players into positions that provide them with the time necessary to fulfill their roles on the field.

“If you want to play quicker you can run faster, but the ball decides the speed of the game.” – Cruyff

Players at every level are evaluated by their ability to play with limited time and space.  Can they adapt – is their technique and decision-making ability good enough?  Can players create their own space (and therefore give themselves more time)?  Part of the beauty of soccer is that players do not have to be fast themselves; rather they need to know how to move the ball quickly.

A basic tactic that young players need to learn early on is the use of negative space, or the space behind them.  When young players start out playing, they are only aware of one direction, and one speed (forward, as fast as possible!).  As they get older they begin to understand the need to slow the game down and keep the ball with the help of their teammates.  One way to do that is to play the ball backwards, as the player in negative space sees more and has more room to play than the player higher up the field.  This player is under less pressure and consequently has more time to decide where the ball needs to go.

“A man’s errors are his portals to discovery.” – James Joyce

Stand on the sidelines, however, and you’ll often hear parents complain when the ball goes backwards.  They don’t really know why, they just know that intuitively it just doesn’t seem right.  If you’re a coach, explain the reasoning behind it.  Will there be mistakes, including the possibility of giving the ball away?  Of course!  At the same time, it is the correct way to play.

Take a look at this video…how many times do Barcelona players pass the ball backwards to give themselves more time?

We all want more time to do things.  When young soccer players figure out how to work together to gain more time, encourage it – don’t chastise them for it!