Here is a drill called “box passing”.  In this case, we have a square, with at least 5 players per square.  In its basic form, it looks something like this: 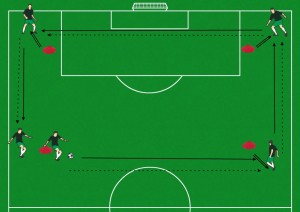 At least one player on each corner (at least two need to be on the starting cone).  To start, only one ball is needed.

What are the players doing?

Pass and follow your pass:  The player with the ball at the starting cone begins the drill by passing it to the player at the next cone, who checks away from the cone to receive the ball with the inside of his back foot.

This can be performed with additional players.  In order to speed up the game an additional ball can be added.  The key is to play with the inside of the foot…right foot to right foot, etc.  The direction can be reversed to ensure players work the left foot as well.

It is critical for players to learn how to “open up” to the field of play.  This is done by receiving a pass on the back foot, which allows them to play the ball in any direction.  If the ball is received on the front foot (the foot closest to the ball), the player’s options are limited to the direction he is facing.

Here is an example; note how the majority of touches are on the back foot.

There are numerous progressions to this exercise.  Here is a basic one, providing a lot of repetition with layoffs followed by a longer pass.