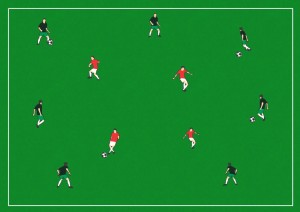 Used as a tool for technical repetition, a number of skills can be worked on.  The interior players receive a pass from a server, perform the specific technique, and either pass the ball back to the same server or pass to a different server.

Defenders can be added to increase pressure, and other stipulations can be added – such as an interior player can not pass to the same server who gave him the ball.

Coaches can point out different skills such as methods of turning, various dribbling moves, heading, receiving the ball out of the air, etc.