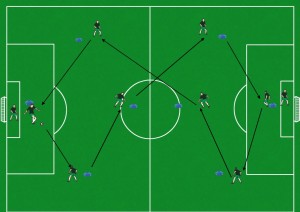 Each player attempts accurate, side-foot passes to the player on the next cone, from one end to the other.

Once the players understand the pattern, a second ball is added so that the drill starts at both ends simultaneously.  Players now need to be aware of where the second ball is – especially in the middle.  In addition, a passive defender can be added in the middle of the field to ensure the players in the center midfield positions are checking their shoulders.  The pattern can be altered to feature a one-touch layoff between the two center midfielders.

Technically, a strong directional first touch is emphasized, as well as receiving the ball on the back foot.  Tactically, the pattern features angled passes, connecting the central defender with the wide defender, with the central midfielder switching play.  Physically, the players need to focus on correct technique and following the pass.  Psycho-social components are addressed through team communication and an increase in tempo through the progression.